To use a VNC through a tunnel, one of the following commands must be issued More information needed...

Then use your favorite VNC client to connect to localhost:5900. The KVM password is the same as mire's root password.

Note that the second command uses a numeric IP address because the KVM does not have a DNS server set. We don't want to set the DNS server, because we'd almost certainly forget to update it if it ever changed -- simplest to just run without one.

One known-good VNC client program is xtightvncviewer. After establishing a tunnel, a VNC connection using it may be established as follows.

Once connected, you will be "looking through" an IP KVM which is connected to a KVM Switch (these are different devices!). By pressing scroll lock twice and then the up or down arrow (ie SCRL SCRL UP or SCRL SCRL DOWN) you can switch between the various machines connected to the KVM Switch. Currently there are two: deleuze and mire.

To access the serial port, use one of the following:

One command corresponds to each of the two serial port connectors on the KVM (we're not sure which is which). After executing the command above, your ssh session will give you a console on the chosen serial port (which is probably connected to the remote power-cycling machinery of one of the servers) 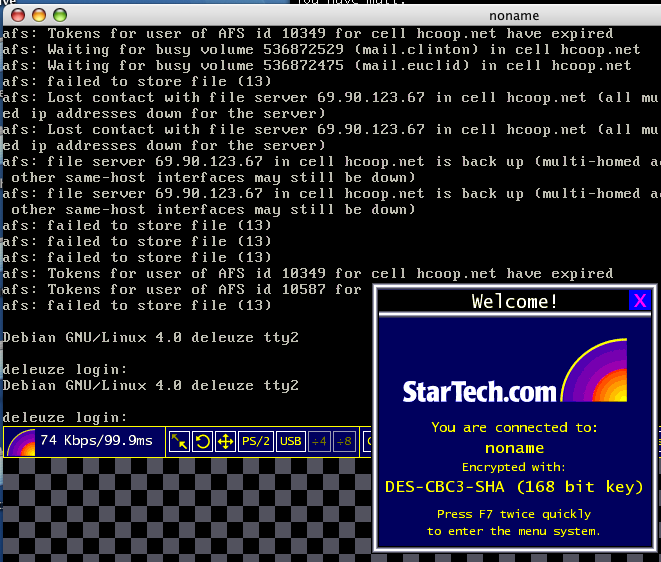 To change the password to the KVM, ssh to root@kvm.hcoop.net and do two things:

The second command will run the KVM vendor's setup program. Don't forget to choose the "Write configuration changes" option when you're done with setup! This will cause the KVM to reboot, so do not be alarmed if you get disconnected.

Note that the KVM stores the password twice -- one as a unix password (for user "root") and another time via the "setup" program.

You can then click on the screen to launch the a Java applet, or you can connect with a vnc client natively if the applet is too slow on your system.

The screen will probably be blanked; press a key to refresh the screen.

Channel 1 is Deleuze, channel 3 is mire. To switch between screens use the sequence Scrl Lock, Scrl Lock, followed by the Up or Down key.

You cannot press the keyboard Scroll Lock button. Instead, click on the [S] button twice. Before you click, mouse over the [S] and ensure that it is highlighted as below.

A caption with the channel number should appear in the upper left corner of the screen as pictured below. Now press Up or Down to change the active channel. 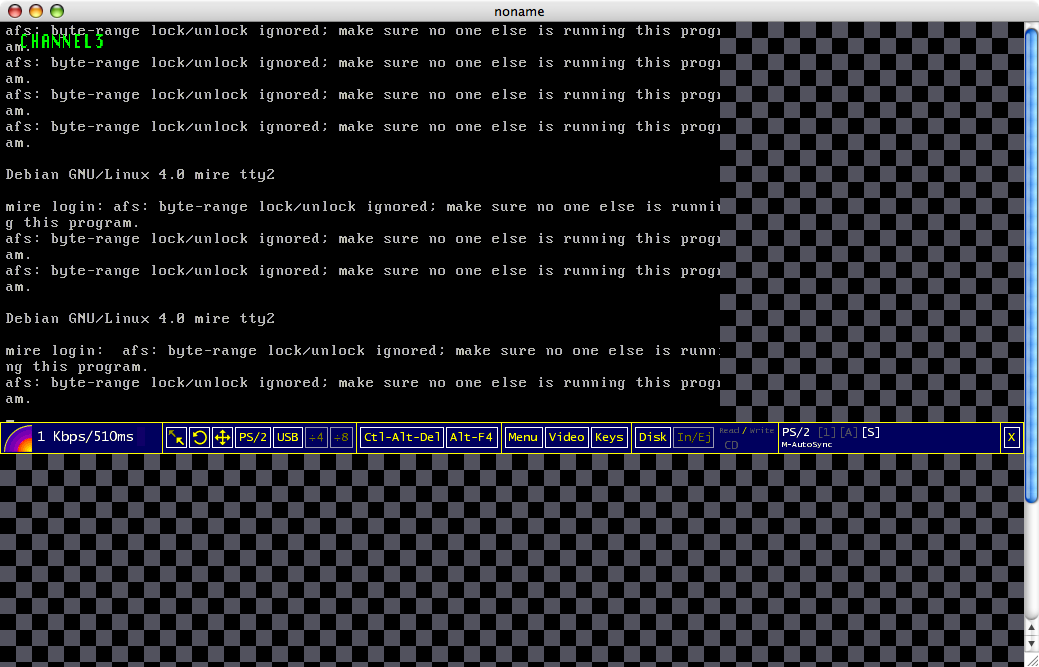